The history of African-Americans has been a paradox of incredible triumph in the face of tremendous human tragedy. African-American persons were shown much discrimination and were treated as second class citizens in the colonies during the development of the nation. The first set men, women, and children to work in the colonies were indentured servants, meaning they were only required to work for a set amount of years before they received their freedom. Then, in 1619 the first black Africans came to Virginia. With no slave laws in place, they were initially treated as indentured servants, a source of free labor, and given the same opportunities for freedom dues as whites. However, slave laws were soon passed – in Massachusetts in 1641 and Virginia in 1661 –and any small freedoms that might have existed for blacks were taken away.

Legislation later allowed laws permitting the act of slavery in the colonies and the areas under the Royal Crown. For example, in 1661 the Barbados Slave Code was passed by the colonial English legislature to provide a legal base for slavery in the Caribbean island of Barbados. This law allowed slave owners the right to do anything they wished to their slaves, including mutilating them and burning them alive, without any interference from the government. From the first ship of African slaves delivered in 1619 to the Revolutionary War to the Civil War and recent history, the legacy of the men, women, and children slaves lives on in the hearts of many in the United States of America through the impact of the colonies economically, socially, and politically. Slavery developed from the growing necessity for cheap labor. Author David Brion Davis states, “Black slavery took root in the Americas in a slow, spasmodic, and seemingly haphazard way, but even the last three-quarters of the Sixteenth century gave ample and cumulative evidence that the fortunes of the New World depended on Africa”. 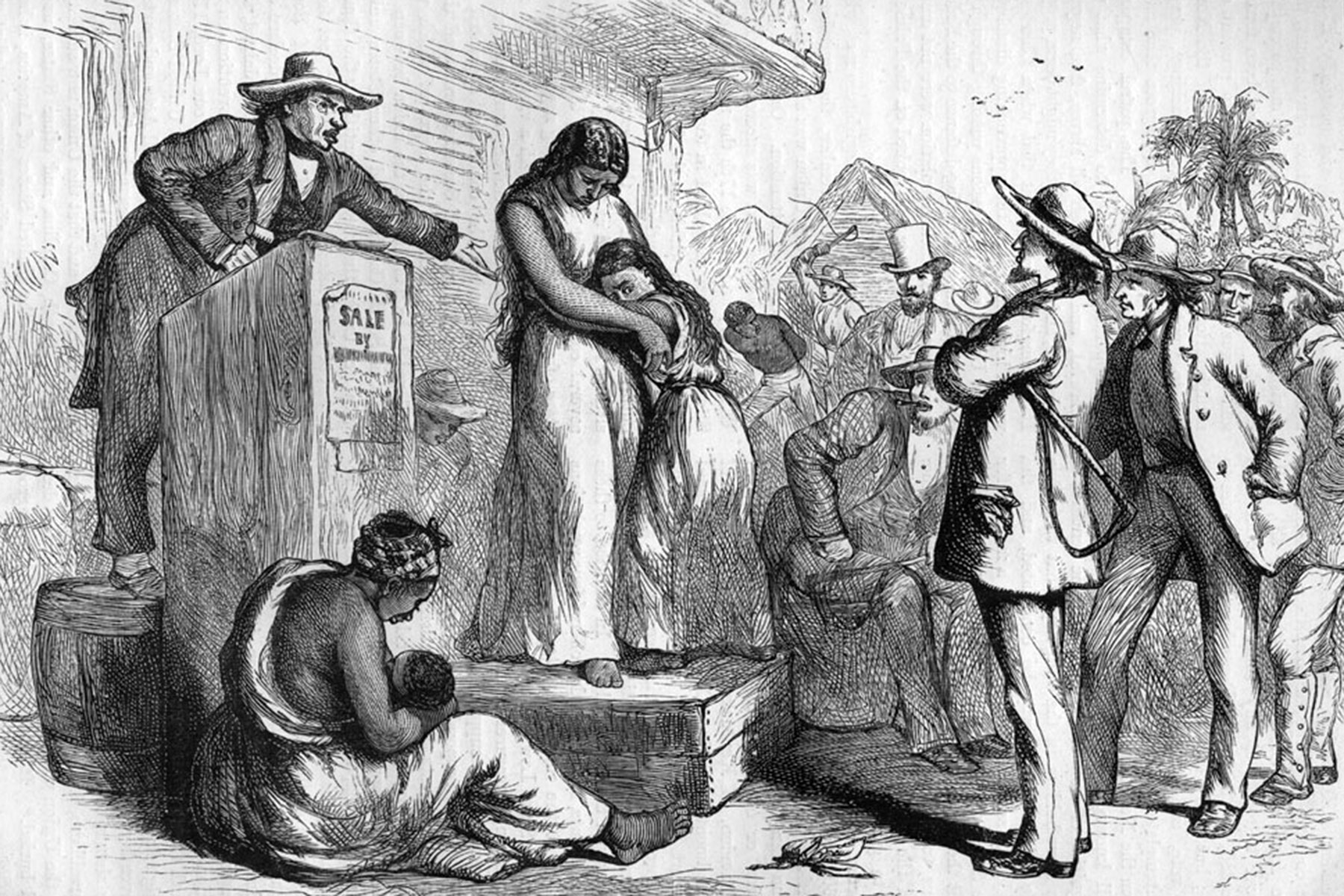 During the development of the colonies and the nation as a whole, slaves were utilized in order to produce the crops and perform laborious tasks that were “below” white people. In the 1660s, there was an increased demand for tobacco products as well as indigo and rice in England.

In order to fulfill the demand, there was a spike in interest in purchasing slaves. More and more slaves were needed to produce larger amounts of crops for the plantation owners.

In South Carolina, indigo and rice were popular crops to be cultivated during the eighteenth century. Slaves would work laboriously cutting, preparing, and drying the indigo so that it could be used by other slaves to die cotton yarn, wool, and silk to produce denim jeans and other clothing items. Rice was also a common crop produced on the “Rice Coast.” Slaves who had the skill of planting rice were employed in the Carolinas and labored over the task of cultivating rice.

The rice was sold within the nation and outside for profit. The slave owner would reap the benefits of having strong workers and often times was able to gain political power and benefitted economically as well.

In Virginia and Maryland, tobacco was very popular in the seventeenth century. Indentured servants were originally brought to the colonies in order to work on the fields, but the demand became so great that the plantation owners began to purchase slaves in order to increase their profit because they did not have to pay slaves. In hopes of being able to control the government and the economy, plantation owners increased the output of tobacco to England. The owners succeeded in allowing more political power due to the establishment of the General Assembly which was an elected legislature. The men who had the largest plantations had more pull in political happenings in turn.

In addition to having political power in the General Assembly, the plantation owners were able to have a substantial income due to the overworked slaves. The price of slaves decreased significantly due to the Atlantic Slave Trade. It became easier for slaves to be purchased and resold with the Atlantic Slave Trade which benefitted the slave owner in a multitude of ways. First, the slaves were auctioned to the highest bidder which often times separated families. The slave was then set to work on tobacco, sugar, coffee, and rice plantations where they worked for no pay and were forced to endure harsh punishments and deplorable conditions. The crops that the slaves produced were then sold in Great Britain for profit. The final stage occurred when the ships began to travel back to Africa with cloth, guns, ironware and drink that had been made in Britain to be traded for African men, women, and children who would then be sold into slavery. The voyage from Africa to the colonies was treacherous. The close quarters caused illness to be spread rapidly though the ship. A multiplicity of men, women, and children did not survive the travel. However, the survivors were sold into slavery and faced harsher conditions working on plantations and farms.

The slaves would work for excruciating long hours in the fields with deplorable living conditions with little to no pay and barely enough food. Laws protected the rights of the slave owners and allowed them to do anything necessary to their “property” in order to produce crops. For example, according to Virginia legislation in 1705, the slave would “receive on his or her bare back, thirty lashes, well laid on, cognizable by a justice of the peace for that country wherein such offence shall be committed” if the slave should resist his master or complete the job in an unsatisfactory manner.

When the slaves did not complete their jobs on time or not well enough for the master, they would be punished and forced to work harder and longer. They would face separation from their families, witness brutal acts towards fellow slaves, and face possible death on a daily occurrence if they did not complete their assigned tasks. As a collective group, the South depended heavily on the production of cotton. With the invention of the cotton gin in 1793, the cotton plantation system spread rapidly across the South in the early nineteenth century. Production of cotton was a grueling task that required much patients and attention. The farming of cotton allowed created a basis for the economic, political, and cultural landscape of the South. Cotton became the primary souse of income for many plantation owners in the South .

Cotton production benefitted the North as well. The cotton produced in the South was sold to the North and was then used to produce clothing and other necessities involving cotton. However, before the cotton gin was invented, slavery had been slowly decreasing and had been nearing its end. With the cotton gin invention, slavery became a necessity in the South. Workers were needed to collect and treat the cotton and to run the cotton gin. Slaves were used for this task and worked from sunrise to sunset in the fields or at their designated station working with the cotton gin. The South was not exclusive to slavery; the North utilized slaves in different manners rather than on farms and plantations. In the North however, there was slavery as well. Slaves were often “auctioned openly in the Market House of Philadelphia; in the shadow of Congregational churches in Rhode Island; in Boston taverns and warehouses; and weekly, sometimes daily, in Merchant’s Coffee House of New York”.

Slaves in the North worked as house servants often times and did not participate in as much physically testing activities as in the South. However, slavery was not as prosperous in the North as it was in the South. The land was also not as conducive to farming and plantation work causing less of a need for slavery. The decade prior to the Revolutionary War, prices for slaves at the stations in Africa rose drastically causing slave buyers to decrease and slave imports in the North to close.

Not wishing to pay the increased price for the slaves and the lack of dependency on slavery, the North gave up its direct involvement with expanding slavery. The economy, however, was not the only aspect of the colonies impacted by slavery; the colonies were shaped socially as well. Slavery created a superiority complex for whites in the colonies, developing social standards in the North and South. Men and women of white skin began to think of themselves as superior to blacks. They thought of blacks as inferior only because of the color of their skin. Thomas J. Archdeacon states in his book, Becoming American: An Ethnic History, “Immigrants, like other white Americans, assumed that the Africans were inferior, and as the group most directly in competition with free black labor they grasped this belief all the more tightly” when discussing the beginning of racism and black inferiority.

The men and women faced with discrimination were forced to endure harsh events such as murder, depressive work conditions, and overall suppression of rights.

Throughout the time period of 1619 through the Revolutionary War, African Americans fought for their rights with riots and uprisings. Betty Woods describes some of the uprisings in her book, Slavery in Colonial America, 1619-1776. She states: There were two serious black uprisings in New York, in 1712 and 1741, and in 1739 South Carolina was rocked by the Stono Rebellion. These three revolts, the most serious of the colonial period, were put down with comparative ease by the white authorities and those black people known, or simply thought, to have been involved in them were executed.

As Woods stated, the blacks were easily forced into their “rightful place in society” which was under that of white men and women. When describing the way that inferiors, and himself, were treated, Antonio Johnson stated, “To be black had at first been a handicap. Now it became a fatal disability, a practically inescapable mark of degradation and bondage”.

To slaves who were forced to complete laborious tasks for the “superior” race had their rights stripped from them and worked long hours that did not even guarantee safety, the next meal, or another day. However, the separation of races not only created a racial superiority complex, but the idea of slavery also desensitized Americans to the truth behind slavery.

Reflecting on the cruelty of slaves from 1619 to the Revolutionary War to his own generation, Frederick Douglas began to describe the “composite nation” in a speech delivered in 1869 to social observers and politicians. He stated: I know of no rights of race superior to the rights of humanity, and when there is a conflict between human and national rights, it is safe to go to the side of humanity… I reject the arrogant and scornful theory by which they would limit migratory rights, or any other essential human rights to themselves, and which would make them the owners of this great continent to the exclusion of all other races of men.

The stance on human rights is one that is appalled by the cruelty of previous generations. Frederick Douglas fought racial standards in the memory of his ancestors who were forced to endure such conditions.