For my following coursework I will be studding, evaluating and also concentrating on a movie trailer called “Shrek 2”. A trailer is a way of launching a new film into the market place. Trailers are mainly used for advertising films. They consist of a short series of clips from a feature film, which encapsulates elements, which targets it audience. It usually lasts between 30 seconds and 2 minutes. Trailers are short because they are only effective over a short period of time as it loses impact. From the trailer we are able to tell what the genre and the narrative of the film is.

You will be told who stars in the film and who the director is. This will give you a good prediction to whether the film is worth seeing or not. Most people will have already decided if it’s worth going to see the film if the stars are shown in the trailers. Shrek is the ground breaking 2004 animated film created by DreamWorks and brought to life by state of the art 3d animation. The film was so revolutionary because the characters not only looked sophisticated and three- dimensional but their personalities were also more human and less cartoon like.

The music used in the film is also different to other such productions. Instead of the characters bursting in to song all the time, the songs are played by an external person and reflect the mood of the characters in a particular scene. The attention to the smallest detail on the fairy-tale characters for example gives the film even more realism and depth. The unusual use of the imaginative camera angles made possible by the use of CGI captures the essence of each character at the most crucial moment in the film. 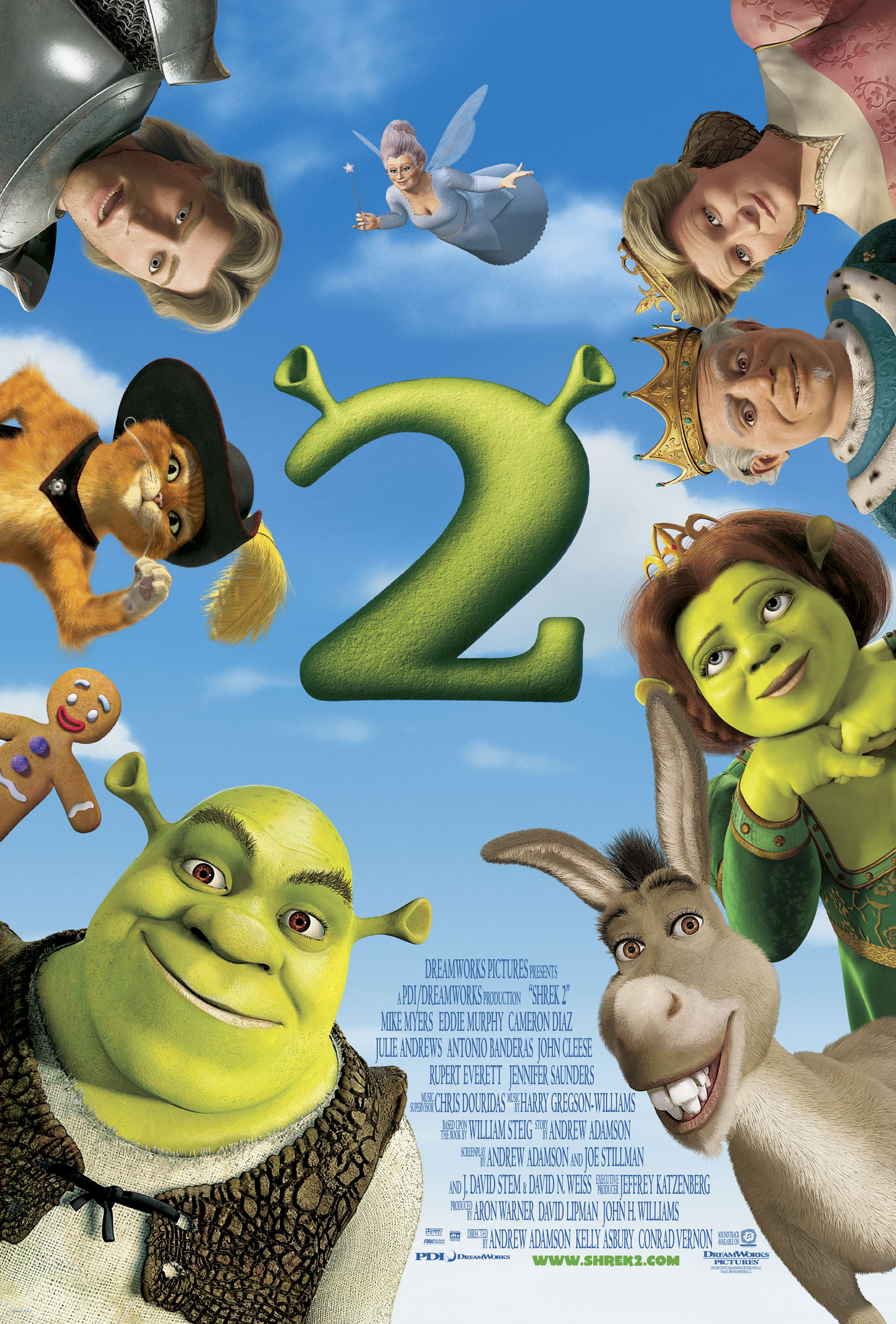 The opening of the trailer immediately catches the audience eye as the camera focuses on the words “Far far Away” which sit on amounting top, as the couple and Donkey travel by a horse drawn carriage for 700 miles to reach the kingdom of princess Fiona parents . Here adult humour is displayed because the board should traditionally say “Hollywood” not “Far far away” this immediately makes us smile. During this journey, donkey being loquacious begins his attributes of his character with him repeating ‘Are we there yet? ‘ throughout the journey.

Shrek is quickly irritated and is reflected in his reply of ‘No! ‘ getting every more deeper and aggressive ‘The kingdom of FAR FAR Away, Donkey? That’s where we’re going! FAR! FAR! Away… ‘ again adult humour is displayed because they probably know the kind of irritation donkey has which are very similar to young kids. After the opening clips of the kingdom there is a flash and “DreamWorks” appears, here a voiceover is used and it says, “DreamWorks invites you to a land of fairytales” and then fairytale characters appear like the ginger bread man, Pinocchio, and the three piglets.

A voiceover is used to link shots and to increase children’s understandings of what is going to happen in the film. One purpose of the voiceover is that it summaries the story, but is done in a such a skilful way, using the right language and voice tones, to dramatise as much as possible without over hyping. Subsequently, clips of comedy are shown when donkey is making fun of Shrek while make their journey towards the kingdom. Donkey says” This is taking forever” Shrek says “well find a way to entertain yourself” Donkey then makes ‘pop’ sounds towards Shrek and Fiona in the onion carriage.

Shark gets annoyed and says “aaaaa”. This humorous comment is used to show the comedy element, which widens the audience base of the film. Also, here a medium shot is used to show further humour depicted by donkey’s body language. Older viewers are kept entertained by the elaborate use of language in challenging and amusing jokes. While the Children would not understand the language but they will simple be smiling due to donkey action and physical movement.

In the next few clips there is a lot of action where all the main characters are introduced, this is one of the unique selling points of the film because the characters, Shrek, donkey, Princess Fiona are all played by big name actors. So the producers use these icons to make people go and watch the film. At this stage a lot of action is thrown in e. g. when Princess Fiona is fighting against someone, effectively using the freeze frame technique.

This freeze frame is also used to show more humour because it’s unusual for a princess to be fighting in a fairytale. Special effects are cleverly used to make the audience anticipate an action packed film. The directors and producers of Shrek 2 have successfully achieved a hyper-reality world in the film. Hyper-reality describes the way in which the media dominates the audiences’ perception of the outside world. Hyper-reality world was achieved by using advanced animation program. This program made the characters look and act more ‘real’ in the film, as they would in the ‘reality’ world.

For example, the scene where Shrek, Donkey and Puss in Boots ran into a farm barn because it was raining terribly, we the audience saw the character actually looking wet. Another example is the scene where Shrek, Fiona and Donkey arrive to the King’s palace. In this particular scene, we the audience saw a huge number of townspeople gathered together to see the return of Princess Fiona and her newly husband, Shrek. The townspeople look so realistic because they were moving about, talking casually to each other and cheering.

The King’s palace also looked realistic because the colours of the building seemed so natural and the shadows were used a lot to make the building look more real and to stand out from the enormous crowd. Hyper-reality enabled Shrek 2 to represent a reality that is ‘more real’ than that which the audience can directly experience in the outside world. In Shrek 2, intersexuality has been used throughout the film. This film allows the audience to identify the references to other types of film.

For example, in the scene where one of the dwarfs passes a gold ring to Shrek and he throws it high into the air because it was too hot, we saw a manuscript in the ring which said ‘I love you’. The scene was ‘copied’ from ‘The Lord of the Rings’. Another example is the scene where, Shrek escapes from the prison tower and goes to rescue Fiona with the help of a giant Gingerbread man. This giant Gingerbread man is very similar to the Marshmallow man monster in ‘Ghostbusters’, Godzilla in ‘Godzilla’, and the giant gorilla in ‘King Kong’.

Some scenes in the film were aimed at a specific target audience. For example, the scene where Fairy Godmother makes a solo performance on the stage and is wearing a red dazzling dress and lies down on the piano. This scene is very familiar to the adults because, this scene was ‘copied’ from, ‘Fabulous Baker Boys’. There were some scenes that were inappropriate for kids to watch. For example, the scene where Shrek and other characters found out that Pinocchio wears a thong. Another example is the scene where the Knights arrests Puss in Boots and finds a baggie of cat herb on him.

The film also features a male-to-female transgender as an evil bartender. We somehow make out that this movie trailer highly concentrates on children due to the mixtures of colours and the cartoon characters, it also focus on young adults and adults them self due to the hummer and animation with star voice throw out the hole movie. The star cast consisting of Mike Myres as the voice of Shrek and Eddie Murphy as the voice of Donkey add their sophisticated and complex dialogue making the characters more realistic and the film eligible for adult viewers.

I think the Shrek trailer was fantastic, effective and a very persuasive, because it certainly influenced not just me, but millions of other children across the world, to go and watch the film. This was achieved by the producers using a lot of clever and innovative camera shots, sound effects e. g. shots of action and humour. These were sufficient to make people feel and think that this was going to be a fantastic and entertaining film. The trailer had a lot of U. S. P’s e. g. the actors, Eddie Murphy, Cameron Diaz, Mike Myers and John Lythgoe.

These actors are very famous and the best in their field. This is another strong selling point of the film and which is brought out well in the trailer. Some of the best clips of the film are shown which is key to engaging the interest. It is important to note that the trailer also tries to appeal to as wide an audience as possible by bringing out the comedy, romance, suspense, drama and action packed thrillers. One can now appreciate the importance the trailer plays in the success of a film and the reasons why a whole industry is required to produce trailers for films.